Elena Delle Donne is one of the most dominant players in the WNBA. The Washington Mystics star is a two-time WNBA MVP (2015, 2019), WNBA Champion (2019), six-time WNBA All-Star honor, and four-time All-WNBA First Team selection. Delle Donne is also the first WNBA player to join the 50-40-90 club, a group of elite sharp shooters comprised of only eight other NBA players. A member of Team USA, Delle Donne took home a gold medal during the 2016 Olympics and was the WNBA scoring champion in 2015. The 2013 WNBA Rookie of the Year, the Delaware native was drafted second overall in the WNBA draft. Prior to her WNBA career, Delle Donne attended the University of Delaware to remain close to her tight-knit family. While at Delaware, Delle Donne led her team to its first ever NCAA Sweet Sixteen her senior year, was a consensus first team All-American, and finished as CAA Conference Player of the Year three times. Off the court, Delle Donne is the author of a middle-grade series, Hoops, and released her memoir My Shot: Balancing it All and Standing Tall. In 2017, she founded the Elena Delle Donne Foundation to raise funds and awareness of Lyme disease research, special needs programs and animal welfare work. 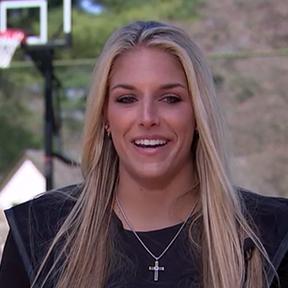