Congratulations to Octagon client and Dancing with the Stars Champion Rashad Jennings.

After a thrilling showing during his final two dances on Monday and fervent fan voting from #TeamShadSquad, the NFL running back has claimed the Mirrorball trophy over recording artist Normani Kordei and former Chicago Cubs catcher David Ross.

Jennings and his Pro Partner Emma Slater, jumpstarted Monday's competition with a Viennese Waltz to "Dark Times" by The Weeknd ft. Ed Sheeran, earning a perfect score of 40 from the judges before securing the number one spot with another '40' for his Freestyle dance to "Uptown Funk" by Bruno Mars.

Jennings is the fourth NFL player to win Dancing with the Stars, joining the likes of Octagon client Emmitt Smith (Season 3).

The eight-year running back entered Monday's event tied for first place with Ross and partner Lindsay Arnold. During the semifinals, Jennings and Slater wowed the audience with two stellar performances, recording a total score of 77 out of 80. Catch Jennings' electrifying routines here and stay tuned for #WhatsNext: more training, dancing, and work with the Rashad Jennings Foundation. 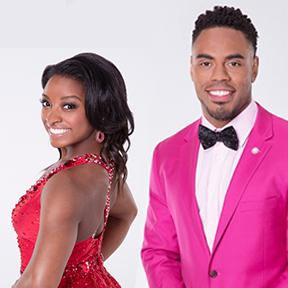